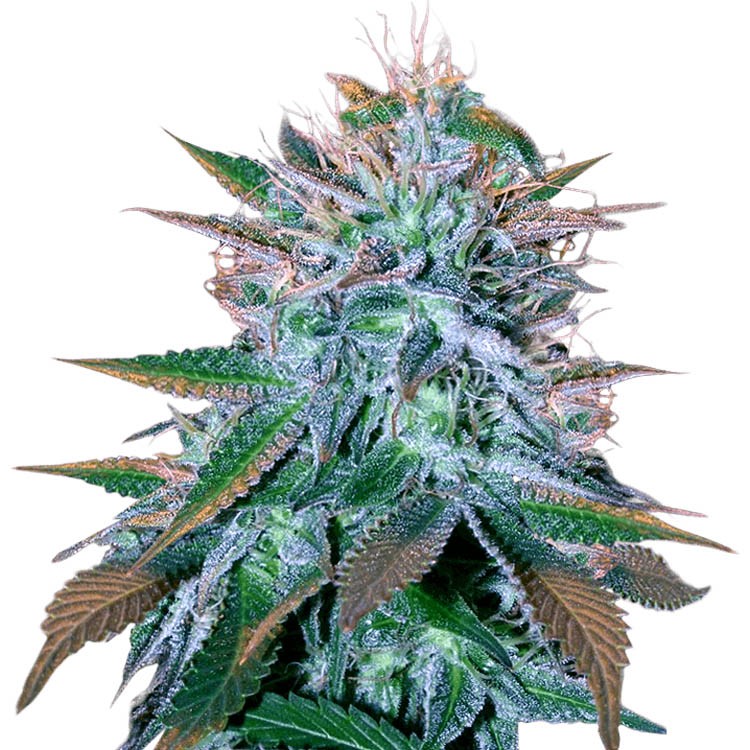 Now coming to the ring, yielding a whopping 400 grams/m2, flowering in only 63 days, winning First place in the 1995 High Times Cannabis Cup, hailing from The Netherlands, and bred by the world- famous Greenhouse Seed Company: White Widow!!!

A number one contender for several decades running, White Widow is perhaps the most famous and well recognized strain on the planet to date! Packing a well-balanced high, White Widow is the perfect strain for any occasion and is sure to impress even the snobbiest of cannaisseurs. Named after its appearance, the flowers on this variety are so packed with trichomes that the colas often appear to be white in color, almost as if they’d been snowed on! White Widow is a true OG in the game of strains and will surely be around for decades to come.

White Widow was first introduced in 1994 by former co-owner of Greenhouse Seeds and founder of The Mr. Nice Seedbank, Shantibaba. Though the origins of white widow spark wide debate, the topic is irrelevant when getting down to the nitty-gritty. The lineage of this icon, however, is not debated what- so-ever and it is well known that White Widow is a cross of a Southern Brazilian sativa landrace and a South Indian Indica landrace. Combining these two meticulously selected strains resulted in a cultivar so famous, it is available in almost every seedbank in the world. Though there has been controversy over who actually created this beast of a plant, one thing remains, White Widow is a staple in the industry and has been used as a cross to create many of the hybridized variations available today, such as: White Rhino, Great White Shark, Moby Dick, White Russian, and Blue Widow.

White Widow offers a heavy sedating and cerebral stone unlike any other. Euphoria and dull energy come on quickly with the first few puffs. Because of its fast onset, it is easy to gauge your dosage which is helpful for newer users. On that same note, however, a quick onset is only followed by the stacking of effects for the user who chooses to delve deeper. Some of the more noted effects of White Widow are: Dry Mouth, Red Eyes, Increase in Appetite, Sedation, Bliss, and Sheer Relaxation. This smoke is perfect for social situations, or for bed time assistance. Breaking out these bright-white, resin covered buds are sure to be a warning sign of the sheer potency that lies ahead!

But how does she grow? That’s why you’re here, I assume. White Widow grows short, bushy, and stalky. She stacks colas from the base of her stem all the way up her branches. Finishing in only 63 days, White Widow is perfect for the sea-of-green farmer looking for large yields in a short amount of time. There is no shortage of resin for the farmer looking to make concentrates. White Widow offers large terpene-rich flowers that reek of sandalwood, pine, and a medley of tropical fruits that pave way for a complex sweet and peppery flavor unlike anything you’ve ever smoked.

White Widow is the strain for you if you're searching for a variety to keep in the rotation forever. You can't get tired of the smell, quick turnaround, and fantastic effects offered by the most famous strain in the world!