Kick back and let your mind munch on this delightful cannabis genetics read.

When you dive into an unmistakable bowl of FPOG, it is easy to understand cannabis from a connoisseur's point of view. The flavors are unique and intense, the aroma is one of a kind, and the bag appeal is something to behold. Once upon a time, FPOG seeds were quite rare and carried an extremely high price point. A pack of these beans has run consumers upwards of $1,500. Was all this hype worth the funds? Is FPOG worth your time? Let's dive into a bowl of this delicious cereal and see what the hype is all about!

The strain was originally bred by Alien Genetics in the San Francisco Bay circa 2012. The mother of FPOG is a delicious cross of the famous “Green Ribbon” and notorious “Grand Daddy Purple”. This mother produced a sweet, fruity, and sour combination that was considered a little racy with negative side effects that included anxiety, paranoia, and dry mouth. In order to mellow the strain out, it was crossed with an OG Kush father whose lineage consisted of Tahoe OG x Alien Kush. This OG cross was the perfect remedy and brought total balance to what is now known as Fruity Pebbles OG.

The Balance of FPOG is surreal. Debates run rampant as to whether this strain is indica dominant or sativa dominant but the general consensus is that FPOG is slightly indica dominant but displays pretty even balance in the effects. FPOG is the perfect strain to treat anxiety, insomnia, and stress with an emphasis on making your tummy growl! Eating is something you’re going to want to do assuming you don’t fall victim to the very welcome calming and slightly sedative effects. Known to be an easy smoke, this is considered one of the smoothest smoking strains available in today’s market. All the OG effects, with some truly exotic flavors, with hardly any throat clench. It’s easy to get lost in the silky-smooth smoke and milk up your piece, pun-intended, then blow some huge dragon hits without having to sacrifice your lung’s immediate integrity.

The term “exotic” is tossed around quite freely in today’s cannabis market and some have even used it to describe strains that show some slight variation in scent, color, or growth. FPOG is a serious contender in the exotic category. With gorgeous bag appeal, FPOG produces some unbelievable picture-worthy buds! Let’s start with the sparkle. FPOG glistens with resin heads that are swollen and large making them visible to the naked eye. There’s no question why this strain regularly tests above 25% THC. The colas are full of an array of colors starting with a tie-dye effect of deep and lime green with velvety purple hues that paint the tightly packed calyxes of the flowers. A vibrant rainbow of pistils can be seen with colors including red, orange, pink, and yellow all stemming off of the same flower making for a nug that is quite reminiscent of a bowl of the sugary cereal it’s named after!

Fruity Pebbles was named due to its unmistakable stench. Simply put, she smells like a bowl of Fruity Pebbles cereal. Subtle cream, slight pine, and cedar pave the way for a tsunami of tropical fruit to crash against your taste buds. Lucky for us, FPOG tastes much like it smells with a heavy emphasis on cereal. The flavors on the FPOG are unique and the subtle notes of aroma become more prominent and you may even notice some slight spice on the exhale. Need a sample of how your buds should smell? Dust a bud of OG Kush with the remaining crumbs of Fruity Pebbles Cereal, and there you have it! Though, we don’t suggest smoking that. This is for scientific purposes only.

Depending on phenotype, FPOG grows very tall making low stress training imperative to a successful harvest. Without proper training, FPOG will be branchy, lanky, and too heavy to hold itself up. This makes FPOG the ideal candidate to run in a Screen of Green. Spreading the plants growth laterally instead of vertically will make for a bountiful harvest without having a spaghetti-mess of branches come late flower. FPOG typically blooms in 8-9 weeks. The main downside to FPOG is her yield though not small by any means, it isn't as large as some of today’s large producers. Though that isn’t a reason to discredit FPOG because the large producers aren’t putting out Fruity Pebbles flavored ganja!

For a one of a kind grow experience that rewards its grower with beautiful rainbow-colored flowers that taste like a childhood memory, this is the winner! One can-not simply describe the amount of joy the farmer receives when smelling something so unique and tasting something so delicious. Yabba-dabba-do get yourself a pack of Fruity Pebbles OG and enjoy the blissful experience all to yourself! 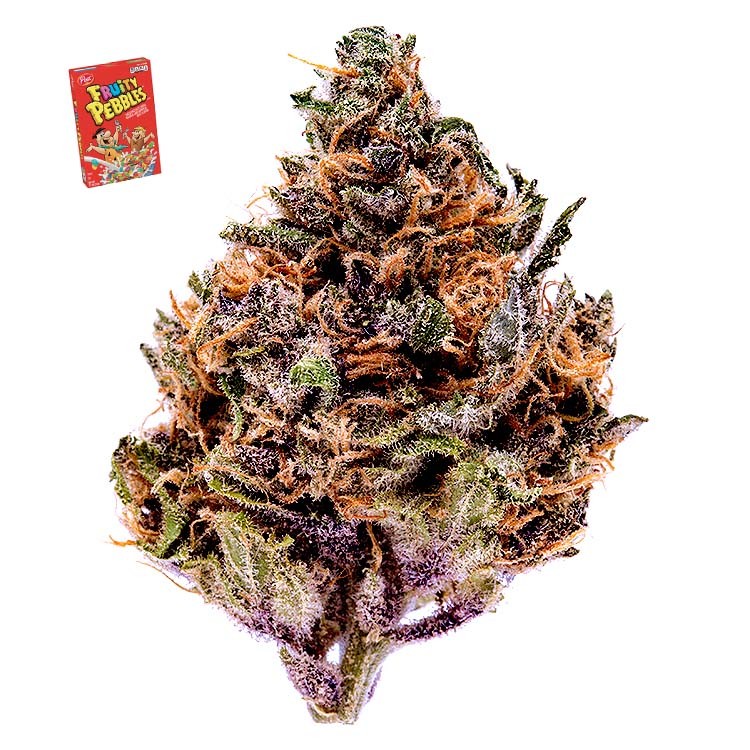